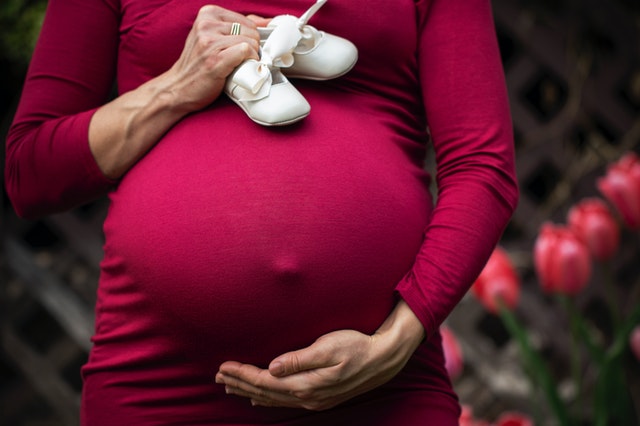 Pregnant In My Forties. I Couldnt Believe It.

Pregnancy after forty can sometimes be difficult, complicated and frowned upon but more often than not it is a joyful and beautiful experience.

Pregnant In My Forties, And I Was Smiling Again?

Positive. Unbelievable. It couldn’t be right. I did another test and, yes, still positive. I was pregnant. It’s stupid to think “how could this happen?” because we all know how it happens, but that was my prevailing thought. I could not believe it, without trying, I was pregnant in my forties. I already had a 14 and 12-year-old at home, and I had no plans whatsoever to have any more children. It never occurred to me to consider abortion. Not once. Weirdly, at that moment and all alone, I found myself smiling. Who knows why? It was going to be chaos and throw all our lives into total disarray, but I was surprisingly happy. I focused on how I would tell my hubby (who also had two adult kids of his own). He was 47 at the time, and I knew this news would be a huge shock. I was right! He took it well and never raised the question of abortion either, although upon hearing the news, he blanched more than a little.

The Three Musketeers Always Had A Fourth Musketeer

Telling my kids was considerably harder. They both cried. Understandable when you think that life had just been the three of us until fairly recently and suddenly everything was changing. We had always called ourselves ‘The Three Musketeers’ and adding a new baby into the mix (on top of a new hubby) threw forth feelings of jealousy, hurt and a genuine disgust that their mother was pregnant in her forties.

I had always loved being pregnant, and this pregnancy was just as beautiful.  Feeling healthy, glowing and contented was something I looked forward to during this period.  However, I did have to undergo more tests than I did in my twenties and I admit to feeling a little weird hanging out in the maternity department, as I was conscious of my older age, but apart from that my experience of pregnancy was just the same as it had been all those years before. I was excited at the prospect of being a mum to a newborn again, even if it had meant turning down the fabulous new, life-changing job I had just landed.

I Thought Being Pregnant In My Forties Was The Issue

At 32 weeks pregnant, however, my waters broke and so began the tough part. I gave birth to a beautiful (and very tiny) baby boy at 33 weeks, and we proceeded to spend the next month in the Special Care Baby Unit. He was fine, just too small. It transpired that the premature birth had nothing to do with me being pregnant in my forties, but everything to do with having contracted Group Strep B, a bacterial infection (that luckily had not carried over to the baby).

Pregnant In My Forties Has Helped Bring The Family Closer

Having a baby born too soon is tough, and it was incredibly hard to manage that first month in the hospital with two other children at home. However, the big kids adjusted superbly and fell in love with this beautiful new addition to our family, going on to become extremely capable, helpful and caring older siblings. The love they all share is immense. Hubby and I adored being new parents again, and our lives were full of happiness.

Perhaps There Should Have Been Five Musketeers Anyways

Positive. It couldn’t be right. I did another test and, yes, still positive. I was pregnant in my forties…again! Within six months of giving birth, I was expecting another. I was now 42. My mother was horrified, the kids were aghast, and our friends were shocked. Hubby and I were delighted. We wanted a sibling for our baby boy, and given my age, we decided to crack on quickly. This pregnancy was much tougher as I was totally exhausted and still healing from an emergency c-section. The sheer happiness at creating this new, little family carried me through the tough moments, and this time, the pregnancy went to full-term. We met our son (not so tiny!) after a planned C-section, and he was perfect. I was 43, and his daddy was 49. It felt crazy and beautiful all at the same time.

I’m Not Going to Sugar Coat It, Being Pregnant In My Forties Was Tough

Fast forward to 2019, and our boys are almost 4 and 5-years-old. My daughter is 19 and has flown the nest and that 12-year-old boy has grown into a 6-foot 5-inch 17-year-old. Being pregnant in my forties was not the hardest part; the difference came afterwards. I did not bounce back from the births as quickly, and I did not manage the tiredness of having babies and toddlers as easily. Juggling teenagers at the same time added to the overwhelming fatigue and much of the last five years has been a roller-coaster of joy and physical exhaustion!

Wouldnt Change It For The World

At the age of 46, I consider myself supremely lucky to have had this opportunity. I never planned for it, but I am immensely grateful that life gave us these beautiful boys despite the challenges of being pregnant in my forties. Our lives are very much richer for it. However, if life surprised us one more time, I know my body could not cope and I would never want to be mistaken for the child’s grandmother! There comes a time when we have to graciously hang up our hat. I have accepted that some experiences are no longer ours to have, and instead look forward to new ones. Hubby’s kids will soon be bringing us babies of their own, and so the circle of life continues…but without the sleepless nights!