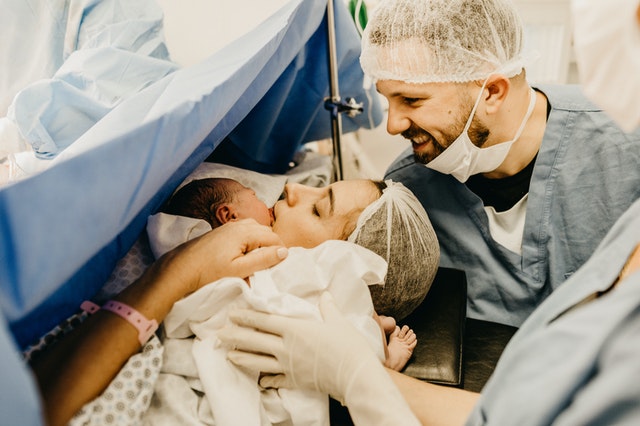 C-Section from a Father’s Perspective

It is believed one in four babies in the UK are delivered by caesarean section, according to reports. But what is a c-section and what is it like from the father’s perspective when he sees his partner on the operating table right in front of his eyes? What can he expect? What are the after effects? And how can he support his partner before, during and after this major operation?

When it comes to pregnancy, mothers have a tough ride – even more so when they are faced with having a major operation such as a caesarean section, or c-section.

A mother who experiences a c-section will not be taking the ‘easy way out’ from a natural birth. It is not an easy ride, take it from my perspective – a father who has seen his wife in theatre on two separate occasions to enable our two daughter’s a safe arrival into this life.

Our two girl’s both entered this world in a stressful and abrupt manor by way of a caesarean section. One was planned and one was a category 2 emergency. Both were very different experiences for us as parents to deal with.

A Planned vs Emergency C-section Are Two Very Different Scenarios

Our first was a planned c-section due to the baby being in a breech position. This is deemed the safest method of delivery under these circumstances. Having never spent any real time in a hospital environment I (and my wife), didn’t truly know what to expect. We were given an arrival slot to arrive within and were shown to a ward where she would be cared for. For us, we were the first operation of the day. I won’t bore or gore you with all the details, but the operating theatre is so quiet it almost feels dream-like. I sat beside my wife — who was clearly apprehensive, and within a matter of minutes, our fully-grown baby arrived safely in the grasp of the magicians on the operating table.

With our second, we were hoping for a natural birth, but due to having previously had a c-section, my partner was deemed high risk. A natural birth was still possible, but more monitoring was required. She became overdue and was induced. Still nothing. She was in labour for around 4 hours, but the baby’s heart rate dropped significantly, and the alarms were raised.

It Was Terrifying And I Was Paralysed With Fear

The following few minutes were the most terrified I had ever been in my life. I froze. Paralysed with fear whilst they figured out what was the best course of action. An emergency was declared, and preparations were made to whisk my wife and daughter into theatre. I was also allowed in.

Having been present for the first c-section I knew what to expect, but that was planned.  And from my perspective, both my wife and I were alot more relaxed. This was an emergency however. I could barely speak.  All I could offer was a hand to my wife. She was also petrified. Once again, the team of professionals delivered the baby safely.

A C-Section Requires A Father To Step Up

On both occasions I was given the honour of seeing our daughter first from above the protective screen. In a selfish kind of way, it was amazing to have seen them both first.

The baby is encouraged to have a skin-to-skin cuddle with the mother and you sit beside them a tad emotional at suddenly becoming responsible for a human. Things are a little blurry. In a good way.

Once the initial joy of meeting your daughter sinks in, it’s time to step up as a father because the mother is in too much pain and discomfort. Expect your partner to be extremely sleepy and in a lot of pain for the following few hours, days and weeks.

After both operations my wife was unable to do every-day baby-related things for around 3 weeks. Bonding was tough because she was unable to pick her up. She could not change a nappy due to the pain. This made her feel incredibly guilty and upset at not being able to. Expect to provide your partner with intense emotional support as well as well as the physical support. Expect to do absolutely everything for your baby, your partner and the house until she is back on her feet and you can begin working as a team.

Both caesarean experiences for my wife and myself were not something we both recommend. A c-section from a father’s and mother’s perspective can be seen as a birth is quick and direct. You see your baby pop-up from nowhere amongst the team of surgeons; it’s the after-effects which grab hold of the mother. The pain, the trapped wind, the peppermint capsules, mint tea, strong pain relief, inability to walk, to breathe, to sleep – utterly horrendous. She felt useless, from a husband/partner and father’s perspective you can also feel helpless.

But you do not complain because you are now a father and the rest of your life has just begun.